If you work for a school district or state education agency, you need to track funding, education initiative results, and students’ progress.

This government dashboard displays a quick visual reference for evaluating the results of a broad and complex funding initiative. Grant recipients agreed to follow one of four intervention models: transformation, turnaround, restart, or closure. This dashboard provides details regarding the amount of money granted, the number of schools that used each of the four models, and the schools that received the most funding.

Next, to view the amount of funding that each state received, we can hover over each state on the “Improvement Grants by State” choropleth map widget. These maps use differences in shading to indicate differences in the values being compared. In this case, states that are lighter shades of blue received less money, and states that are darker shades of blue received more money.

Just by glancing at the map, we can easily see that Florida and Pennsylvania received the most money. Bold BI’s choropleth map widgets can be set up with just a few clicks of your mouse, and they are invaluable when viewers need an easy visual reference for comparing different measurements within a geographic region.

The dashboard’s funding data is critical in reviewing the program’s success. For example, viewers can analyze the geographic funding breakdown to determine whether there is any correlation between the amount of money spent and the improvements demonstrated by the states’ students. The “Top 10 Schools by Amount Granted” list could also offer insight into this question. For instance, if the schools that received the most money did not noticeably improve, then perhaps adjustments need to be made to the program in the future.

Finally, the “Number of Schools Implementing Each Model” widget outlines how many schools used each of the four possible intervention models. Again, cross-referencing this data with an analysis of the improvements demonstrated by each state could shed light on the efficacy of these models. For example, if most schools did not show significant improvement, and most schools used the transformation model, then Congress may wish to reexamine that model before future grants are distributed. 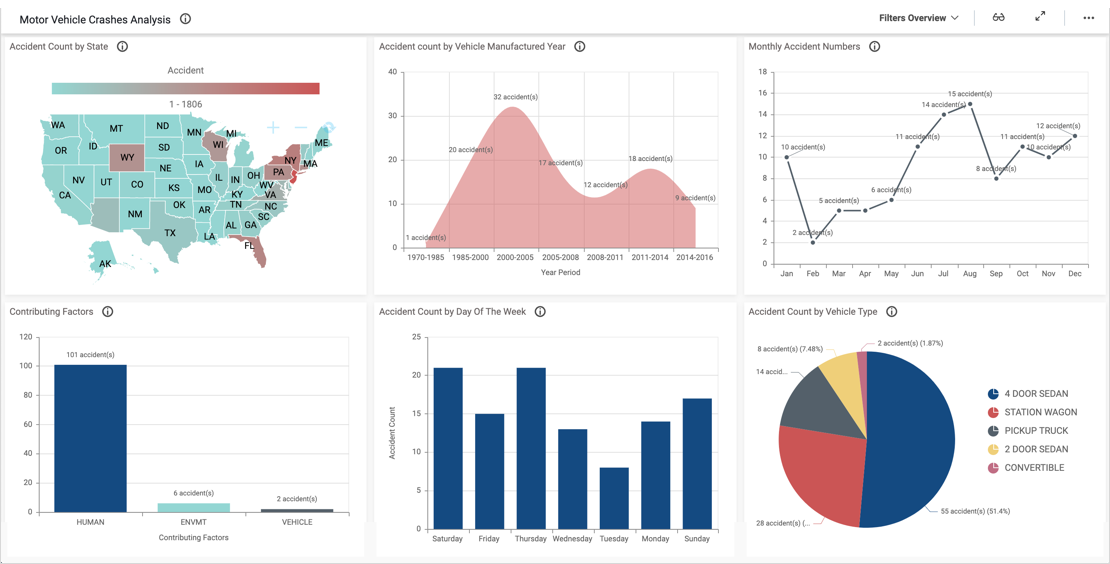 If you work for the DOT, DMV, or a government safety agency, you need to be able to monitor car accident statistics and causes.

In the health care field, you need to be able to monitor everything from…

In the hospitality industry, you need to be able to monitor everything from…

In the information technology field, you need to be able to monitor everything…

We'll help you find the best solution for you